You can see a list of all your development branches if you navigate to the Tests > Branches tab in the mabl app. From there you can do the following actions:

Clicking on a branch in the Branches tab brings you to the Branch Details view, which provides a summary of the tests and flows on the branch as well as critical information, including:

The compare and conflict resolution views are not available for API tests.

Comparing a branched version to the main version

To compare two versions of a test or flow in a test branch and master, go to the Branch Details page for a specific branch and click on the change count (under the Changes column) for the test or flow that you want to compare.

If updates have been made to the master branch of a test or flow since the last version on the test branch was saved, a red

icon will appear in the conflicts column. Clicking on the red

icon opens up the conflict resolution view, where you can decide which steps, variables, and parameters you want to keep and create a new version on the test branch. That way, once all conflicts have been resolved, you can safely merge the new test branch version into master.

If either the master or the branch version of a test or flow was saved prior to March 27, 2022 there is insufficient information to determine whether it is safe to overwrite the master with the branch version. Therefore, a red ! icon is shown to indicate possible conflict. The version info underneath name of the test or flow would also be missing the description "Branched from version ... on master". Follow the steps in this section to safely reconcile the changes between the versions.

The conflict resolution view appears as a three-columned table with the following sections: 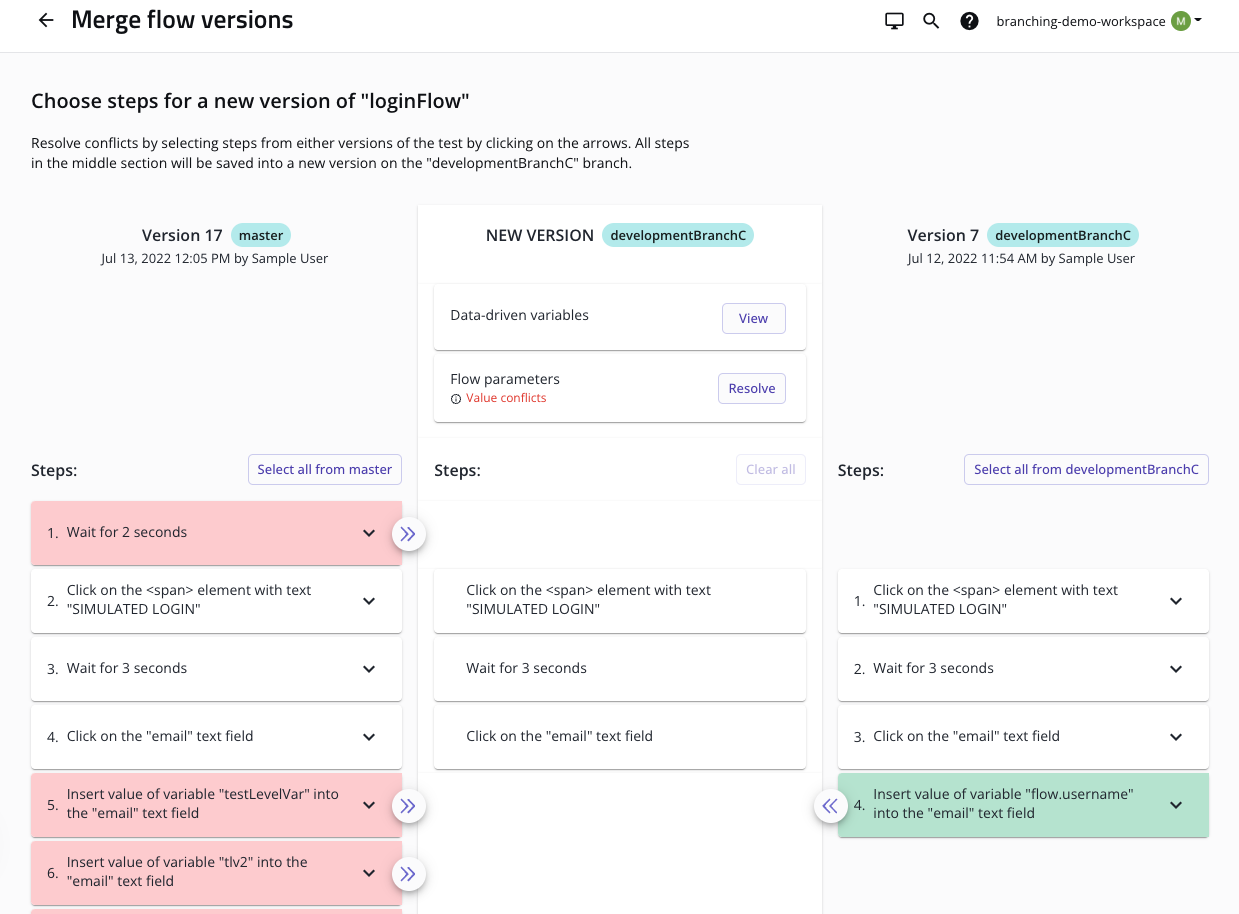 Value conflict
The variable and parameter cards show a list of all variables or parameters combined from both versions, with tags indicating where they came from. A

Value conflict message indicates that a variable or parameter exists in both versions but has a varying default value. You can select and deselect which variables you'd like to use in the new version using the checkboxes. Value conflicts must be resolved to continue.

When you're satisfied with the steps, variables, and parameters selected in the center column, click Review to check over the final version. You may return to the previous editing page and make changes if you want to change anything. Otherwise, if everything looks correct, click "Save" and a new version will be saved to the test branch!

If not all conflicts have been resolved and you continue with a merge, the test version of conflicting steps and values will overwrite the master version.

To merge a branch into master, use the Merge button on the Branch Details page. If you have no conflicts on your branch, you will see the following confirmation:

If you try to merge a branch that has potential conflicts, you are presented with a warning modal with the suggestion to resolve conflicts. If you choose to merge anyway, the steps and values from the test version will overwrite the master version.

Sometimes the merged version of a test or flow will result in unintended consequences and you will need to revert to a previous version. Since tests and flows are independently versioned in mabl, it is not currently possible to reopen all of the tests and flows on a branch in the previous version. If you do need to restore a test or flow to an earlier version, you can take the following steps:

After a branch has been merged into master, it will still appear on the Branches page. To delete a branch, you can click on the Delete icon.

If you delete a test or flow, it will be deleted across all branches.