Most mabl customers use mabl's existing integrations or the mabl CLI to integrate end-to-end testing into their DevOps pipeline. However, If none of those options fit your needs, you can use the mabl APIs to run end-to-end tests on code deployment.

Before integrating mabl into your CI/CD pipeline, please review the different ways to run mabl tests and check out the article on Continuous testing in CI/CD

This article provides you with an example of how to integrate mabl as a step in your CI/CD pipeline using two simple API calls. The first API call will kick off all plans associated with a particular environment, application and/or labels in response to a new software deployment event. The second API call can be used to check the status of the plans that were launched as a result of the first API call.

The provided examples assume that you are using a CI build tool like Jenkins, Gitlab, or CircleCI and a Linux-based container which allows you to write custom build steps in bash with standard tools such as curl and jq. If you are using a different type of build tool you may need to adapt these examples.

Let's assume that your team has an automated CI/CD workflow into which you want to integrate end-to-end testing with mabl. As an example, consider the following simple pipeline which represents part of a CI/CD workflow: 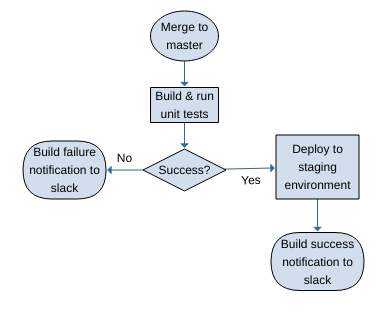 Before you can get started with the Deployment Events API you'll need a few pieces of information:

Labels are a great way to organize your mabl Plans and you can pass them as parameters to the API for more granular control over which plans get executed.

One way to learn how to use the Deployment Event API is by navigating to Settings => APIs in mabl and selecting Deployment Events API under the API documentation section. Use the CURL command builder to specify the plans you'd like to trigger. You can find more information on this feature here.

You can also play with the APIs using the interactive API reference.

In addition to the minimal environment_id property, you can also pass other reference information associated with the deployment event. Here is a more complete example of a JSON message that can be passed to the API:

The revision, event_time, and properties attributes are all optional. Here is a quick description of what each of these mean:

When you invoke the Deployment Events API you will get a JSON message back containing an event ID and some other information. For example, it might look like this:

The most important part of the response is the id field. This value is the deployment event ID and will be used later when we want to retrieve the results of the executions that were kicked off my our deployment event.

You can use build a CURL command to retrieve the status of a deployment event on the API page in the mabl app:

Here is a sample response from the Execution Result API:

For most purposes it should be sufficient to process only the summary information under plan_execution_metrics and journey_execution_metrics. Any output field named app_href contains a link to the mabl UI that may be used to directly view an entity or the results of an execution.

Tests used to be called Journeys

Inserting mabl into your pipeline

One option for inserting mabl into your CI/CD pipeline would be to: 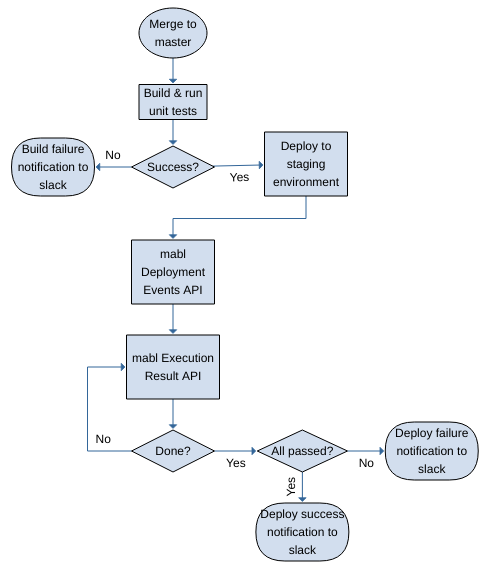 Tying it all together

Below is a bash script that can be used to trigger a deployment event and then poll the executions until they either complete or fail. Of course you will need to substitute your own API key and environment ID before using or adapting this example.

Be sure to replace 'api-key' and 'environment-id' below with your own API key and environment ID.